The Ghana Airport Company Limited (GACL) says it has revised its decision to interdict a staff who conducted a pre-boarding search on the National Security Minister.

In a statement dated September 13, the GACL said the decision is due to “further consultations and facts which have since come to its attention.”

The company noted that “the Committee of Enquiry shall proceed with its mandate as spelt out in the Convening Order”.

This comes as many disagrees with their decision saying the Officer was just doing His Job and hence does not deserve such punishment. 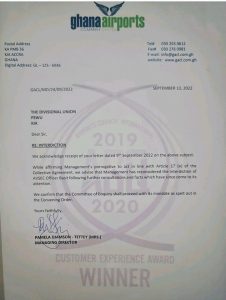 Full Download, Scheme of Learning and Lesson Notes Term 3 All Classes till End of Term