NPP MP Adwoa Safo has been spotted in a throwback video showing off her riches as a young lady. 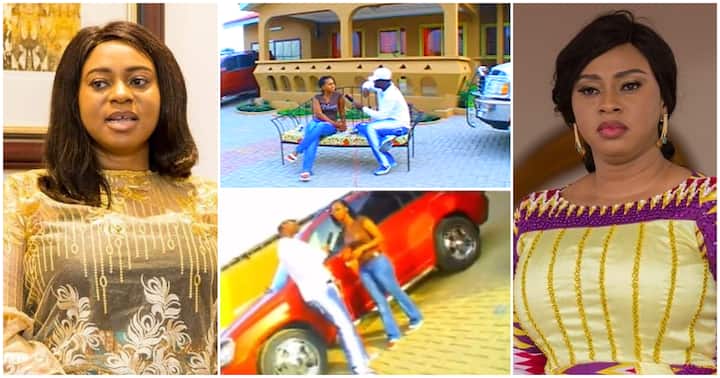 The video which dates back to 2006 when Adwoa Safo appeared on Bola Ray’s lifestyle TV show, Paradise The former Gender Minister showed the inside of her mansion with three cars including one with GHC80,000 ($8,000) spinning rims (wheels) New feature:

Dome-Kwabenya MP Sarah Adwoa Safo who is the daughter of renowned Ghanaian car manufacturer Apostle Kwadwo Safo has been living a plush life her whole life.

A throwback video of the NPP MP has popped up online showing her luxurious life back in the day.

The video comes from Adwoa Safo’s May 2006 appearance on Paradise, a lifestyle programme hosted by Bola Ray.

Its unfair! Hear my side of the story, Hon. Sarah Adwoa Sarfo Fight Back

In the video which Bola Ray has reposted on his YouTube channel, Adwoa Safo who had just been called to the bar as a lawyer opened the doors of her mansion to show people around.

Adwoa Safo shares proud photoshoot moment of son with Kennedy Agyapong (photos) Adwoa Safo has been living large since the mid-2000s. According to Adwoa Safo, the beautiful house was gifted to her by her father as part of her birthday celebration in the previous December.

The house had many well-furnished rooms and large living room decorated with pictures of Adwoa and her family.

Adwoa Safo’s three cars On the compound, Adwoa had three vehicles, which were expensive back then, parked. Among them was a Ford F150 pickup, a Toyota Highlander, and an Infiniti QX50.

Explaining how she uses the three cars, Adwoa Safo stated that she preferred to drive the Ford on weekends and used the Highlander when she felt happy.

The Infiniti happened to be her main car which she used for work and other official engagements. Going further, the then newly graduated lawyer revealed that the Infiniti cost 35,000 dollars. Aside that car’s cost, she spent eight thousand dollars to customise the wheels (rims) of the car into a spinning one.

Being just about 24 years at the time, Adwoa Safo’s car collection at the time was quite impressive and adding it to the house, she was a rich young woman. Adwoa Safo & Kennedy Agyapong’s Son Gets GHC500k Chevrolet Corvette As Birthday Gift Meanwhile, Adwoa Safo has splashed big money on her son with Kennedy Agyapong as he celebrated his birthday.

Adwoa Safo bought a convertible Chevrolet Corvette which is estimated to cost over GHC500,000 for the boy, Kelvin Ohene Safo-Agyapong, the proud mother who is in the United States with her children shared videos of the moment.